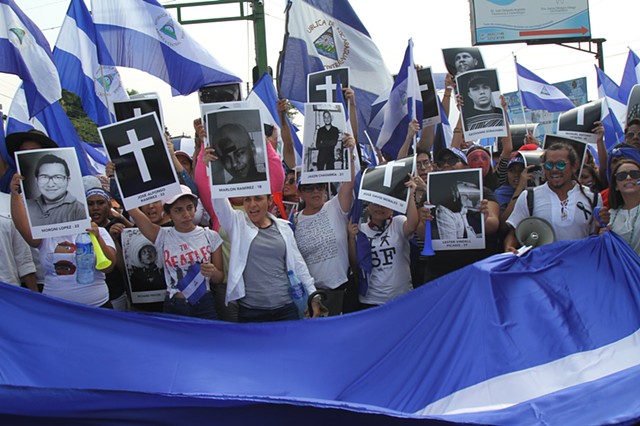 Art of Solidarity was cofounded by Nicaraguan American artist and educator Maria Gabriela Aldana and US­-based filmmaker Aleks Martray in 2007, producing community­ media documentaries and murals in Nicaragua ever since. AoS was developed out of a public high school arts classroom in Baltimore, Maryland as Bmore Cultured from 2004-2008. In partnership with the Maryland Institute College of Art, AoS grew as a study abroad and produced over a dozen film, media and mural collaborations between North American and Nicaraguan artists and communities.

In 2015, AoS responded to the most vulnerable community that would be affected by the Interoceanic Canal by creating a documentary about their fight to protect their ancestral land and indigenous way of life. See trailer of Bangkukuk Film.

AoS was the only international witness to Bangkukuk's elections in March 2018.

In April 2018 thousands of Nicaraguans from all over the country took to the streets to voice their concern and opposition to several policies of Daniel Ortega’s 13-year dictatorship. An estimated 500 people have been shot by the police and paramilitary. About 30,000 people have fled the country in the last year. Local and international journalists in Nicaragua have been threatened, tortured, and deported. Wilfredo is fleeing the violence and threats in his home country. Wilfredo was one of many journalists documenting the human rights violations taking place from Jinotega to Masaya. If Wilfredo returned to his beloved Nicaragua, his life would be in immediate and serious danger. He comes to us seeking political asylum in the United States. He has an extensive network of support across North America and Nicaragua through The Art of Solidarity – a network of young people committed to social justice. Donate to support Wilfredo's lawyer fees.